About a year ago, the well-known American actor and music star, Will Smith took a a selfie lying down on a large woven carpet installation by Alexandra Kehayoglou. He was visiting the Triennial at the National Gallery of Victoria, Australia, and performed a gesture shared by many other visitors to the exhibit. Kehayoglou’s work seems to inspire such engagement. It is not at all unusual for viewers of work by Kehayoglou to depict themselves directly in relation to her verdant textile creations. An obvious reason may be that people simply want to share their experience of wonder with their friends. But perhaps more interestingly, Kehayoglou’s audiences might be wishing to anchor and embed themselves in a present they feel is slipping away, except for in that very moment. Is affective synaesthesia the right way to describe such a feeling? Perhaps this is why, when Flemish designer Dries Van Noten commissioned a three-dimensional carpet by Kehayoglou for one of his fashion shows, the models wobbling down the runway on their high heels were forced to surrender their ‘power’ and simply lay down on the soft cushions resembling grass. Unlike the functionality of industrial carpets, the art of Kehayoglou communicates “a density, a third dimension, a temporality, a garden of Eden,” as the artist has stated.

The Edenic bliss the visitor feels when experiencing Kehayoglou carpets speaks of multiple affective temporalities. In Being and Time, Martin Heidegger reflects on the activity of timeliness and its relation to “das Ekstatische,” signaling the ecstatic unity of temporarility, whether past, present and future. Experiencing the carpets of Kehayoglou could be described as phenomenologically stepping out of the linearity of straight time, understood as a self-naturalizing temporality. This is the reason why the artist rejects the constrictions of a limited idea of art in order to open the possibilities for utopian connotations. The Vasarely-like abstract patterns that usually cover the ubiquitous industrial carpets we live our lives on might certainly seem more suited for the standards of modern art than hers. In fact, many attempts to elevate carpet manufacturing into art have consisted in mere reproductions of canonic works of art onto woven two-dimensional surfaces.

Kehayoglou’s carpets, however, bridge the distance between the present and past in a more personal way. For generations, her family has designed and produced carpets. The parents of her father, Constantino Kehayoglou, arrived in Argentina from their birthplace in Sparta, Greece, bringing with them a knowledge that was eventually transformed into an industrial success. The company, ‘El Espartano’, is one of the leading carpet manufacturers in the Southern Cone. An industrial mandate has been integrated by Kehayoglou in two ways. First, by disarming the production phases of the machine and making it manual. Secondly, by deconstructing both the industrial and artistic obsession with progress and reconnecting with a matriarchal line establishing Alexandra Kehayoglou’s paternal grandmother, Eipiniki, as the bridge between the present and an ancient ancestral knowledge. Through art, Alexandra transforms weaving into a form of invocation of that ancestral knowledge that is a still-to-be-explored and a much-needed dimension for shedding light in the field of contemporary art.

Kehayoglou’s rejection of the industrial ethos carries with it a rejection of artistic canons that have detached themselves from social context to the point of nihilism. The visually striking piece on which Will Smith lay down is also an accurate representation of the topology of the Santa Cruz River in Patagonia. It is a landscape which will soon be flooded and submerged under water after the decision of the Argentine government to build two hydroelectric dams, effectively splitting the river into two different streams and creating a serious hazard for the already delicate ecosystem. This will have an irreversible impact on the nearby glaciers. Through virtuoso craftmanship and evident visual appeal, the artist positions her carpet as a beacon, pointing ou the crimes perpetrated against the environment.

The invitation to participate in the NGV Triennial came after a presentation of No Longer Creek, at Design Miami/Basel, in 2017. No Longer Creek is a carpet that reproduces the endangered pastureland in Vicente Lopez, an area near the artist’s childhood home. Using art as a document where crimes against the Earth are recorded parallels the forensic architecture investigations effected by Eyal Weizman and his team over the last decade. One example is Weizman’s plan and elevation re-constructions of the Grenfell Tower fire in East London. There is no doubt that at the core of both Weizman’s and Kehayoglou’s project lie ethical concerns. Their differing approaches to aesthetics highlights the efficiency of Kehayoglou’s artistic position.

Kehayoglou’s commitment to the area of the Santa Cruz River was made evident when she decided to explore the region herself, by kayak. For this adventure, she was forced to train like an athlete, in order to row between forty and eighty kilometres a day, in shifts of eight hours, covering the length that separates Lago Argentino in the Andes from the Atlantic Ocean. Knowing that many before her had abandoned such a task, she confessed to having asked the river for protection. Perhaps that is why, before crating the carpet to ship it to its final destination in Melbourne, Kehayoglou invited a few percussionists to perform a type of ritual. She recalls that when the ceremony started, the skies went dark and torrential rain started to pour.

Once the Santa Cruz River carpet arrived in Australia, Kehayoglou came to see striking visual similarities between her woven spiritual cartographies and the works of indigenous artists. The depictions of the ‘rainbow serpent’ by the Yarrenyty Arltere Nation from Alice Springs seemed uncannily familiar to her even though she had never seen these designs before. The serpentine shape of her representation of the Santa Cruz river could also be found in spiritual iconographies from other parts of the world. According to the Northeastern Brazilian Candomblé tradition, the god Oxumaré adopts this same shape, symbolising the snake, a rainbow, and the river. In the Near East and Ancient Greece, since ancient times, serpents have been considered symbols of prophecies and knowledge. The snake, as a topos, reappears in its most famous paradoxical shape in the Judeo-Christian Genesis, as a token of sin and also wisdom. These forms can also be appreciated in fifteenth-century carpets, as Kehayoglou showed me when we visited the Zaleski Collection together, at the Galleria Franchetti/Ca d’Oro in Venice. Kehayoglou’s carpets are embodied genealogies of how images of great symbolic and emotional power emerge from a distant past into the cosmologies of those people whose lands are in danger of disappearing. From this point of view, her carpets are not only Atlases in the style of Aby Warburg, but also vehicles for presences to travel in time and space. In her depiction of the Santa Cruz River, there are spiralling shapes in the water that mirror the visual patterns of certain fossils that may be found almost anywhere in Patagonia. According to Kehayoglou, those were the most difficult shapes to weave and are the areas of the river in which treacherous currents are known only by the locals. The myth of the flying carpet might not only be a metaphor but a space where the physical and the spiritual connect. In fact, since ancient times, carpets have been used as a physical support for prayer. There is also something mantra-like in the weaving process which induces weavers in certain cultures to chant and pray while making them. Kehayoglou’s emphasis on the spiritual aspects of her otherwise descriptive carpets aim at reinstating this pre-modern dignity while at the same time opening new and urgently necessary paths for art.

THIS ESSAY WILL BE PUBLISHED IN… 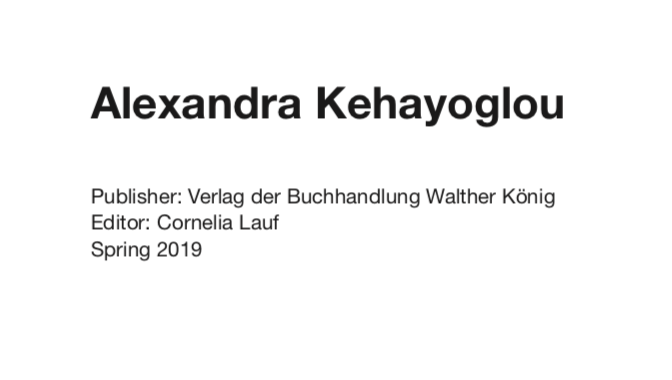 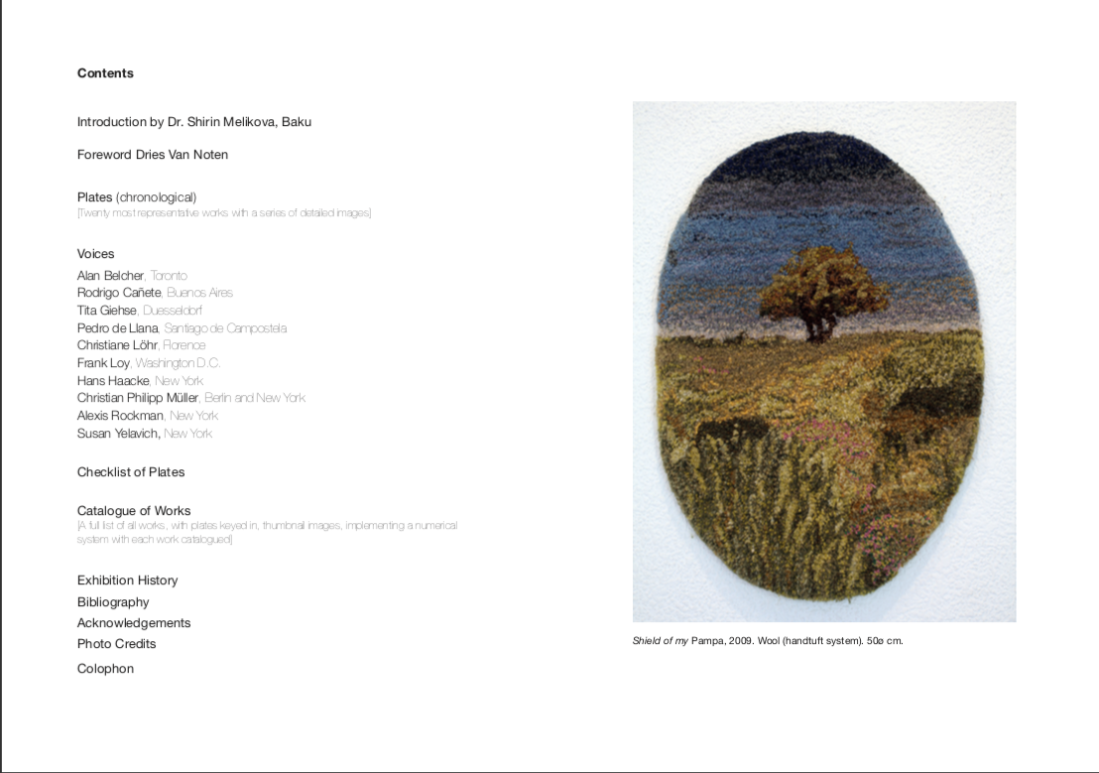