Formerly known as the John Player Award, the BP Portrait Award has, since its creation in 1980, become the most prestigious portrait competition of its kind in the world. This happened while the dynamics of the art world changed beyond recognition transforming its products, since the 90s, into costly commodities and later, after the new millennium, adapting to New Labour creative economy directives, according to which art was seen as a tool for social disciplining through the discourse of social inclusion. Every year, those selected by the jury take part in an exhibition at the National Portrait Gallery. This year it has run from June 14 until late September.

In short, the show is an astonishing display of mimetic virtuosity which, in an art context almost completely taken over by lazy versions of conceptualism and badly read poststructuralism, comes across as labours of love. But what kind of love? There are those who thematise this trying to freeze time in order to keep the object of their affection as long as possible even when they know they are changing. Let’s take for example René Tweehuysen’s (b.1957) portrait of her son Finn about which she says: ‘As parents, we must learn to gradually let go of our teenagers. In this portrait of my 17 years old son, I wanted time to stand still while I wonder what’s going on in that adolescent brain?’. The portrait is ambiguous. He looks as if he is torn between being nice to her mother and do what he knows will please her or going away. The triangular composition creates a circular motion that his mother seem to use as a mantra to keep that moment in a loop. The triangle’s vertex is his sons face that looks somewhere else.

Phoebe Dickinson’s portrait of the aristocratic Cholmondley children has been done, as the text says, ‘without any preconceived composition’. Dickinson, however, transforms the portrait of the two children into into mere props of a larger family portrait that is more a detail of the monumental house designed by architect William Kent than a portrait. The Spanish baroque frame takes this poshness to silly hights and the whole exercise becomes kitsch when the are put to compete with the stucco putti guarding the doors pedimental frame which are unnecesary allusions to the allegories of night and day by Michelangelo in the New Sacristy in San Lorenzo. There is something silly and nostalgic in depicting the children in such oppressive environment that speaks volumes about their parents’ own insecurities.

Zack Zdrale’s (b.1977) portrait of his sister discloses a lot of the sibling’s relationship. In his own terms: ‘As she settled into the pose her strength as a mother and as a working scientist came through’. What is being conveyed is not science but a different type of intensity, even resentments that overwhelm the categories defined by social and professional roles. It was at that point that I decided to stop reading the texts which were inevitably structured in two paragraphs, the first one was a short CV with the institutions and awards won by the practitioner and the second one was a text which summarised the motivations and context for the artist to paint the portrait. According to this, no selftaught or eccentric artists were part of this show. Furthermore, there is the problem of the strong emphasis that a competitive context of the BP Award put upon artists to be as mimetickly virtuous as possibly which, in the majority of the cases, displaces the attention from the sitter to the artist transforming these paintings into displaced selfportraits of the artists. At the BP Portrait Award the issue of authorship is more problematic that it seems at first sight.

In Jamie Coreth’s (b.1989) Broken Bodies the text gives far too much information. Obviously trained in the Florence Academy of Art which, at this point, represents the upper scalons of the social division of labour that already classist British artistic education, the curators tell us that: ‘while a soldier in the Parachute Regiment, Mark sustained a severe injury that ended this time in the army leading to this decision to concentrate on his careers as a sculptor. Painted at night under artificial light, Coreth says that he casts his shadow over an old clay figurative sculpture, which was cracked across the hips and across the heart’.

A similar case is that of Conor Walton’s (b.1970) ‘The New Religion’ which, according to the curators is ‘inspired by Renaissance altarpieces and Walton’s aim of finding an equivalent by replacing Christian iconography with environmental concerns and biological scientists together with Charles Darwin, Gregor Mendel and James Lovelock, are portraits of Walton’s children in the place of musical angels’. This scientific ‘sacra conversazione’ with a chimpanzee occupying the place of the Virgin with a Claudian glow framing it from behind creates an environment more linked to the world of entertainment (Jurassic Park?) than to science or even better for my argument, if it approaches science, it does it from the pedagogical perspective of today’s museums. Although it is manually virtuous, its visual language does not match its intentionality and comes across as unnecessary kitsch.

Something similar but indicative of a problem I found in this show can be seen in the paradigmatic and colonial Huey Glynn-Jones’ (b.1977) ‘Portrait of Gifty from Shitima’. The portrait is a small size close up of an african kid with a penetrating, yet soft glance. About this piece, the curators say: ‘The portrait is of Gifty (who unlike the artist and like dogs has no surname), a student the artist met while traveling in Zambia after leaving his foundation course. The artist volunteered at Shitima school in Kabwe, which serves children from some of the most disadvantaged local areas and made some studies of the boy before returning to the UK’.  I honestly would have preferred not to have read that text.

The same happens with the very Lucian Freudish portrait of Vicent Desiderio by Bernardo Siciliano. Ania Hobson‘s (b.1990) ‘A portrait of two female painters’ according to whom ‘by painting us in a natural way rather than a stereotypical feminine way, I wanted to celebrate female painters today with a feeling of determination’.

A point in case is the very Jenny Saville-ish portrait by Hugo Fergusson (b.1988) of Tony Albert ‘who is one of the students whom Fergusson supported at the Poetry in Wood training projct for adults with learning disabilities in Spitalfields’ and suffers from Down syndrome (?). These portraits embody something that always bothered me about the BP Portrait Award which is its constant need to praise inclusion as a source of artistic value. It is as if the viewer is made to witness a competition of who is more socially responsible and who would make the best match for the goals of the education and community development departments in the majority of the museums in the UK museums. This ‘neo-humanist’ insistence pushes away the dark, the hesitant, the disruptive and the perverse and makes the whole exercise somewhat predictable.

Although I really liked Miriam Escofet’s at the same time materialistic and animistic depiction of his mother in ‘An angel at my table’ which obtained this year’s first prize (£30K), its astonishing virtuosity and pristine cleanliness shouldn’t have made it necessary to include a ghostly appearance on the table in the form of a porcelain sculpture topped by a Samotrace victory which, to make things worse, was qualified by the curators as ‘surreal’. As an allegory of her mother’s mortality, it takes the viewer too close to the fantastic relaxing the necessary tentation of that kind of topic and diverting our attention from its intended meaning. 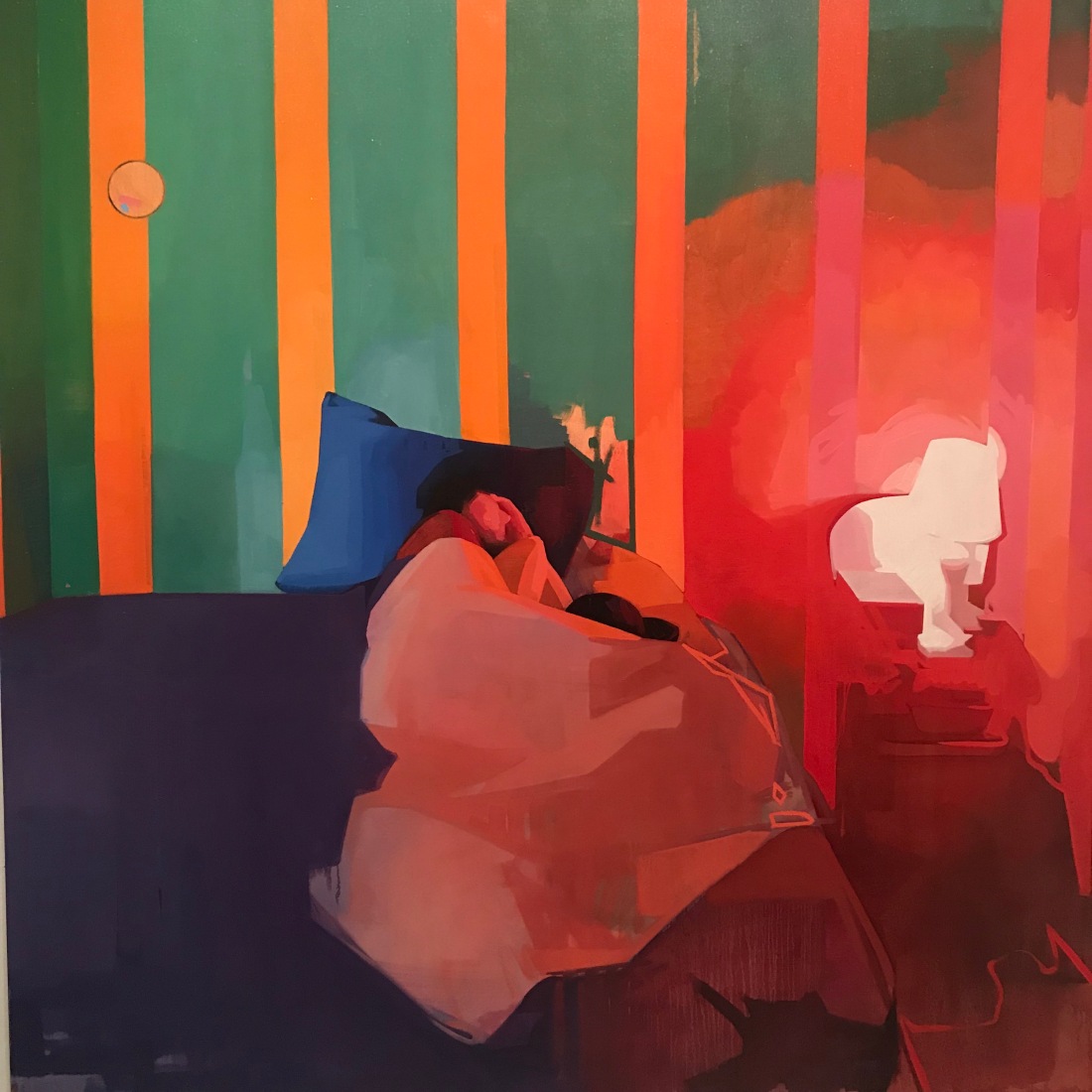 To be honest, I didn’t really understand the second prize for Felicia Forte’s ‘Time Traveller’, Matthew Napping’ which is a retro 1980s hommage to the New Image style of Achile Bonito Oliva and Nicholas Serota.

The third price was for the extremely camp Zhu Tongyao’s Simone,a depiction of an uglish chubby boy around whom coalesce all kinds of art history Marian clichés such as birds, flowers, a cave and two churches (one of the Californian and the other European do to the fact that his mother is American). The portrait however, that in my humble opinion was in a league of his own was the astonishingly cool, abstract and non challant ‘Time and the Dog’ by Jack Freeman (b.1944) which, for once, did not try to be a statement of good social conscience. I particularly loved this painting because it is not posing as the very bourgeois expression of inclusion, social awareness or good parenting but instead it is what it is, a matter of factual portrait of a friend who one doesn’t judge or use to position oneself in an ethically obsessed art world bureaucracy. J A T

3 thoughts on “WHAT HAS ALWAYS BOTHERED ME ABOUT THE BP PORTRAIT AWARD IS THAT BOTH ARTISTS AND VIEWERS RUN TO PRAISE EACH OTHER FOR HOW INCLUSIVE AND TOLERANT THEY ARE, LEAVING PERVERSION, HESITANCE AND DARKNESS ASIDE”