I have the feeling that, in the UK, the art criticism that is published in the media has become a tribal confirmation of a truth that is never made explicit. In a recent discussion with art critic Matthew Colling on his Facebook feed, I was accused by Turps Studio’s Dan Coombs of ‘poststructuralist’ (since a couple of years ago, this is an insult) after I made it clear that Collings’ missed the point when considering one of Francis Picabia’s deliberately ‘bad paintings’ as ‘boring’. A couple of weeks earlier, he had said that until then he considered Frank Auerbach as ‘tedious’. From ‘boring’ to ‘tedious’, the art critic’s choice of words made me think of the context of their utterance which is no other than the social media eco chamber where a group of artists and art lovers coalesce around the ‘celebrity’ critic under the Facebook status of ‘friends’ in order to celebrate the way they mutually deploy the word ‘quality’ as an ideologem to reassert the tautological solidity of that eco chamber.

In spite of the fact, Coombs used the world ‘postructuralism’ as an insult, he was immediately inebriated by the temptation to read the Picabia work with a ‘postructuralist’ psychologism for according to him that painting was ‘a representation of an Anti-Oedipal drive to opposed middle clase mores’. What this shows is that discourse changes according to the strategy of the moment. Coombs can be modernist and poststructuralist, at the same time, while pointing the finger at others as if in themselves they were something to be ashamed of. But isn’t this strategic of dismissiveness (also Collings’) for dismissiveness’ sake a symptom of something else? Of course, when criticised from the left, they quickly switch to a fast track current-affairs-ism through which they assess the relevance of a work of art through its relevance for the current political situation. Doing that, they make sure no one will disagree but the result is that everything stays the same and criticism has managed once again not to say anything. 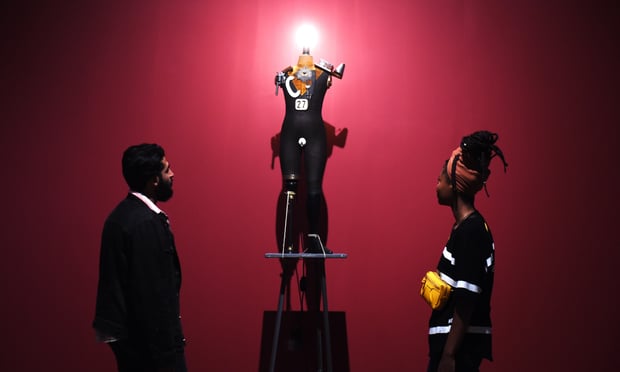 I felt something analogous after seeing ‘Aftermath: Art in the Wake of World War One’, currently, at Tate Britain. As I argue here, there is a mirror effect between the way Tate decided to stage the show and the way British art critics writing for the main newspapers talked about it. Both The Guardian’s Adrian Searle and The Evening Standard’s Matthew Collings couldn’t resist to open their pieces by placing the relevance of the show in the context of the war in the Middle East. About the first room, Collings said: ‘It could be a drone’s-eye view of Basra. Nothing changes except the name of the war’. But… is this so? Can we, really, compare Basra to London during the First Word War? Who is telling the story and how and, most importantly, why he doesn’t think it changed? Are we acknowledging Syrian people with the same heroic tone than the English did at the time?

The Guardian’s Adrian Searle gets, as usual, carried away when demanding that Wilhelm Lehmbruck’s Fallen Man, a creature on hands and knees, his buttocks raised, the top of his head against the gorund, his inverted face looking back between his legs at his own genitalia, be recognised as one of the great 20th century sculptures. But before carry on canonising great men, where are the women in this show? Why isnt’ there a genealogy of what happened with the art of those who were not visible by the patriarchal art institution? There are many works by Charles Sims, John Singer Sargent, Philip Wilson Steer and the younger generation with Wyndham Lewis, Stanley Spencer, Paul Nash and CRW Nevinson that were commissioned by the British War Memorials Committee. Still no women. The highlights of the first room are William Roberts’ A Shell Dump, France (1918) and Charles Sims’ The Old German Front Line, Arras 1916 (1919).

The second room extends this to an exploration of the culture of commemoration once the artmistice of 11 November 1918 declared the end of the war. Architectural memorial such as the Cenotaph were abstract enough to represent all citizens and minimise the memory of the horrors of war. Although Tate recognises in their text that the memorial sculptures mainly depicted white bodies, there were few official memorials to the servicemen from Asia, Africa and the Caribbean who served with the British, French and German armies. On show there are Ernst Barlach’s The Floating One (1927), Emile-Antonie Bourdelle’s France (1923), Stanley Spencer’s Unveiling Cookham War Memorial (1922), Eric Kennington’s Maquette for the Soissons Memorial for the Missing (1927), William Orpen’s To the Unknown British Soldier in France (1921), etc. I found it surprisings that there were no objects or images that represent the non white or women. The third room is dedicated to the wounded soldiers as ‘an alternative memorial, visible in flesh rather than stone and a reminder of the terrible cost of war’. Here, art is a way of documenting the physical damage. The first female of the show appears with Sella Hasse’s ‘One-Armed War-Blinded Man at the Machine’ (1919). Her images aim at presenting the wounded not as victims but instead as people asking for better support. In Otto Dix’s Two Victims of Capitalism (1923), the first woman represented appears in the form of a prostitute. As usual, the body of women as artifacts for providing pleasure or reproduce.

According to the curatorial text, the fourth room is dedicated to the Avant-Garde and more specifically to Dada and Surrealism which are the modernist movements that were in charge of destabilise gender roles. Works by John Heartfield and Hannah Höch contested how the war was being remembered and created a type of image that opposed fragmented identities to maimed bodies. Having said this, the way Hannah Höch is contextualised is used to reinforce the patriarchal view that instead of destabilising gender roles, reinforces them. It would be interesting to explore Höch’s obsession with dolls and why she did not considered them as art. The hybridity of her dolls might have functionsed as an interesting mirror to George Grosz and Edward Burra cyborg figures combining flesh and machine parts. These echoed the use of prosthetic limbs by war veterans and evoked anxieties about the fragility of the male body. Of course, the damage inflicted on bodies was even worse on the minds which shaped surrealist art and writing with Max Ernst’s Celebe on show. The following room makes a case for painting as the medium of regeneration and the Avant-Gardes are shown as sandwiched between two moments: the official visual discourse of devastation and the more private visual discourse of rebirth. There is something too official in a show that comes across as one of those rememberance poppies which are undeniable valuable but only help us to remember the past as we want to remember it. Again the loop. J A T

One thought on “MATTHEW COLLINGS DIMISSES PICABIA AS ‘BORING’, DAN COOMBS DOES THE SAME WITH ME AS ‘POSTRUCTURALIST’ AND I LEFT THE FIRST WORLD WAR TATE BRITAIN SHOW FEELING THAT UK INSTITUTIONS MIRROR THEIR ARTISTS POST VICTORIAN PATRIARCHAL BELIEFS”