Upon arrival to Simon English’s realist installation, the viewer is confronted with two figures assembled with smaller ‘painted drawings’ on the left corner of the first of the two Hoxton’s Peer Gallery exhibition rooms. The one on the left has been drawn with a thick brush in black paint against a tiled structure that overlaps a series of phrases and very delicately drawn figures that belong to the post-Victorian imagery that characterises English’s body of work. One of those smallish images is an exquisitely drawn Florence Nightingalish figure  that seems to be embracing a crossed out figure that made me think of Joseph Conrad’s ‘Darkness’. The other figures are reminiscent of the costumes, Korean artist (recently shown at Hayward Gallery) Lee Bull wore in her early ‘Monster’ performances which were a mixture of the comic, the prosthetic and the cyborg. Those delicately drawn figures are the ones that allow the viewer to extract meaning from the large ones on the front. Inscriptions with the words ‘ease down’ are repeated on the body of the large figure on the left inviting us both to unwind (in order to accelerate) and to slow down (so as to stop the binge). The fact that the large figure on the right is a nurse makes perfect sense and reinforces the reading that this is a world in which order only comes through pharmacology and public medicine. The NHS is, according to these images, a warzone where urban gay life, eventually, gets real. Both childish and deadly, his Philip Gustonesque imagery reinforces the paradox of a social group that is more connected that it has ever been before while, at the same time, not being able to connect at all. 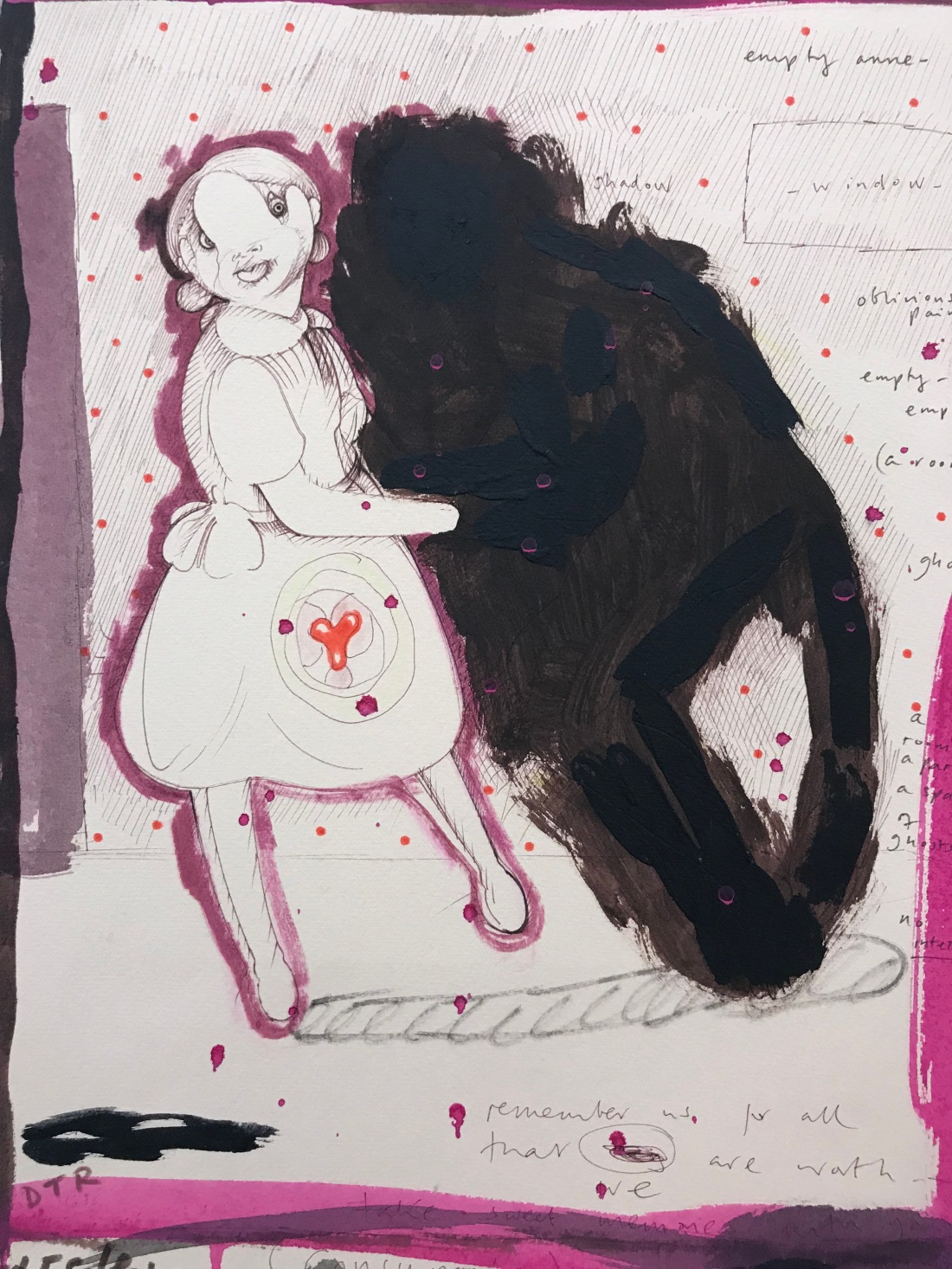 On the wall on the right, there is a series of ‘drawings’ made with ink, pen, graphite and watercolour arranged in grids that continue on the second room. The first column of drawings depicts an eye which could also be a sun besides an abstracted figure that confronts the viewer as a mixture of humanoid and owl (?). Below that drawing there is a cock with an overlapping inscription that quotes Carly Simon’s ‘you’re so vain, I bet you think this is about U’. The third image shows that same owl-like figure visually linked to a house and a car that seem to drag him to the right while saying: ‘love me’. Property as a paradoxical instrument for isolating and also for finding love. At the bottom of that column there is a rat that stares at the viewer and says: ‘Don’t be a victim of a foolish heart…’. The own-like figure reappears in another drawing with the inscription ‘It’s the choking kind’. A nearby drawing has a headless figure with a large cock being served but a figure on his knees which only touch it with a crossed out glove. Not only is this a world of technological connectivity that emotionally disconnects but it is also one in which human beings become sexual cyborgs whose behaviour and, according to Simon English, bodies are shaped by android sex apps and porn. 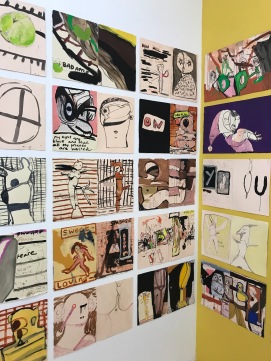 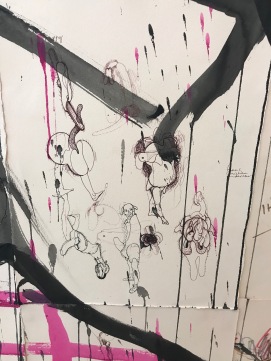 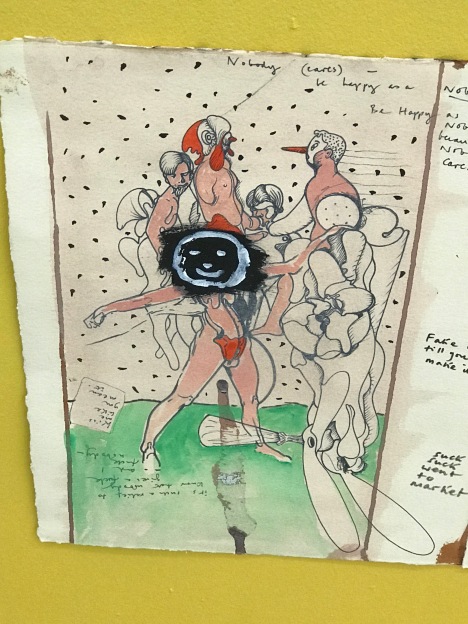 It was at this point that Hyeronymous Bosch came to my mind and his demons and hermits as behavioural types that lead to either damnation or salvation, respectively. Monsters and demons are in Bosch, however, what exists beyond the limits of society. As a matter of fact, that artist was obsessed with what lies outside the bounderies of society as a place of abjection (the demons) or extremely painful salvation (Saint Jerome and Saint Anthony). By contrast, in Simon English, his cyborg monsters are the very fabric of society. They are us.  Lunacy is not an enemy of the social but its very reason of being. In other drawings in the show there are cars that look like toys but at the same time are  have been anthropomorphic. This remind of Rayner Banham’s writings as critic and curator of This is Tomorrow in 1957 at Whitechapel Art Gallery where in his ‘Hommage to Chrysler Corporation’ (now at the Tate Britain’s collection) Richard Hamilton explored the sensual aspects of cars in times of advertising and mass media. 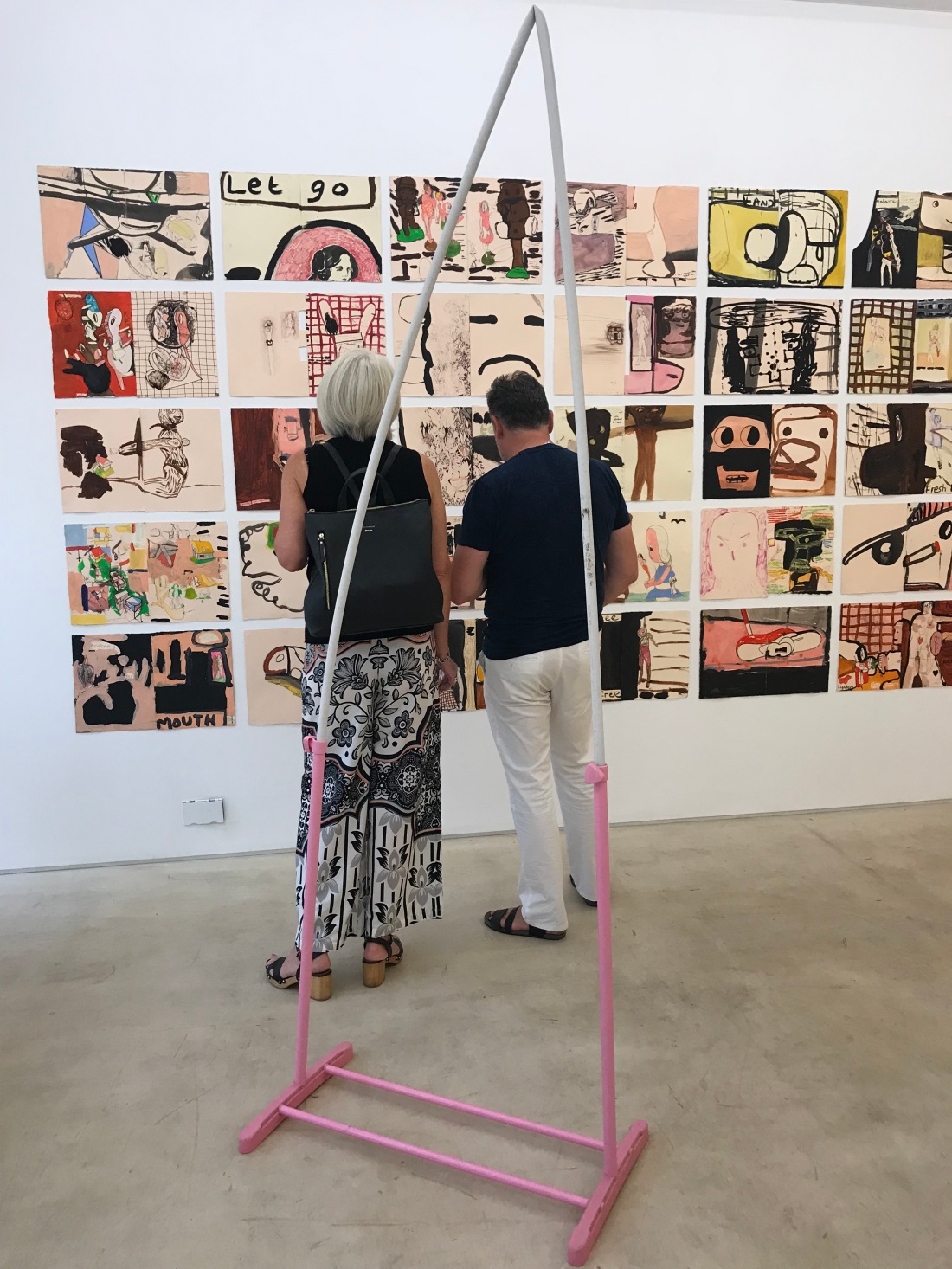 English is clearly very influenced by the feminist art of the 1960s and 70s in his need to reject the formal constraints of the masculine modernist idiom in order to inject an autobiographical content to it that comes across as a commentary on gay life. His decision to place a series of Barry Flannaganish sculptures on plinths and tables on the gallery windows diverts our attention from the realist reading of the painted drawings on the walls  in order to make us paying attention to questions of ‘style’ while, on the other hand, he seems to tell us that that is not the main purpose of the show.

This is the reason why I think that by trying to do too much, the biggest flaw of this show is curatorial and to be more specific, editorial. This, if we bear in mind that none of those sculptures need a plinth, unless the space of the gallery made it impossible to show it otherwise which means that this might not be the right venue for displaying these objects or that he didn’t sufficiently edit his show. Most of those sculpture are supposed to invade the viewer’s space in the same way the tiny figures in the drawings invade that (as background) of the monumental ones. 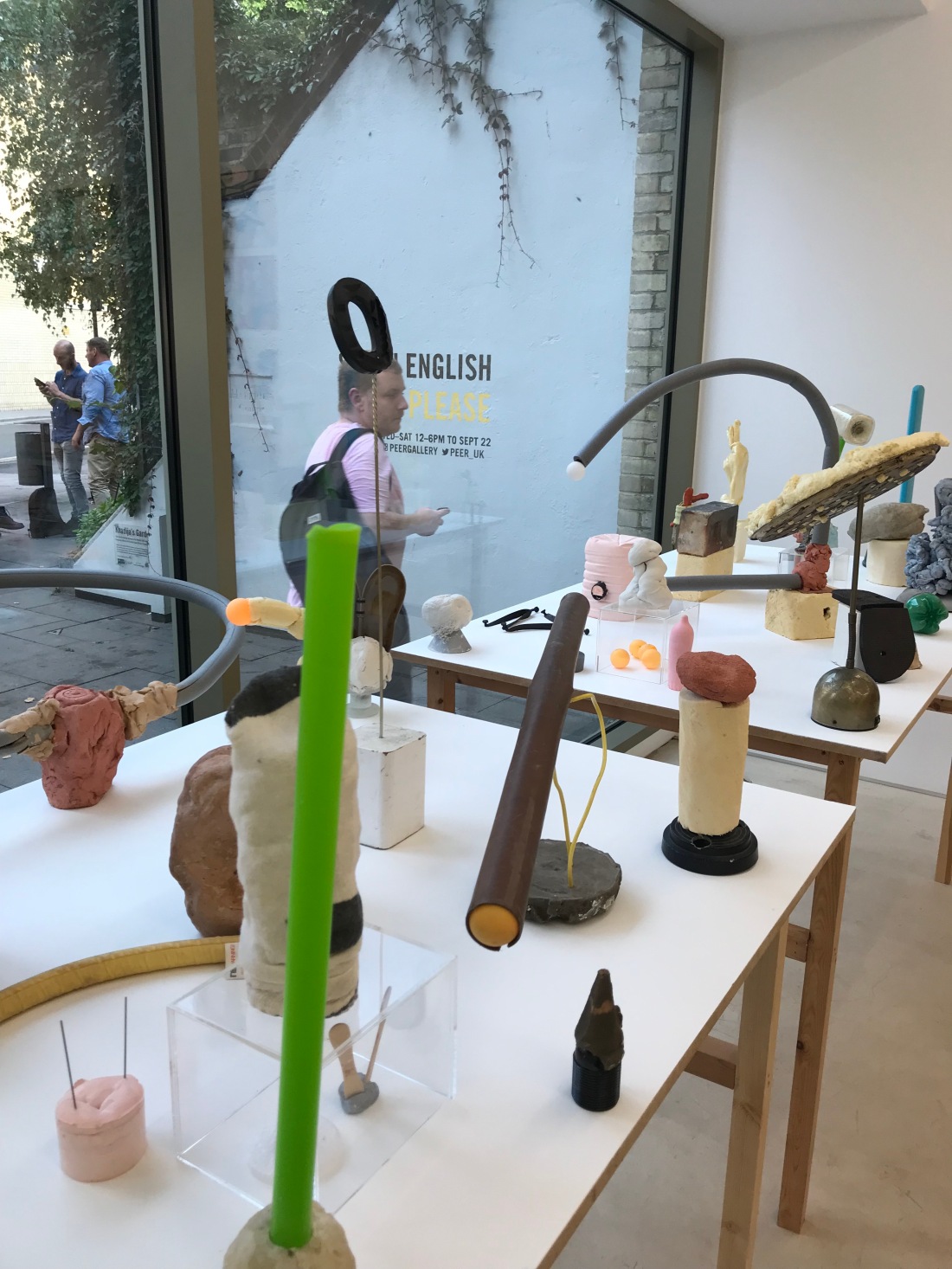 But which is the artistic object here? Personally, I think that in order to extract meaning from this show one has to see it as an installation of sorts. This belief is certainly reinforced by the texts in the catalogue. The first (‘I Covet Your Skull’) by Laurence Scott confirms the reading of the show as portraying the individual’s post-modern thirst for connection with others. ‘Given his many sublimated and not so sublimated poems about homosexual male desire and manly love, it feels natural to ask what Whitman would have made of Grindr, though his own beardedness and poetic interest in beards might suggest a leaning towards Scruff’, he says. The second text contain two poems by Hendrik Verena and Jackson Stauffner which mirror our (Samuel) Beckettian metamorphic present of constant transformation only to stay still as portrayed in Simon English’s ‘demons-as-us’. Neither of the aforementioned texts is, however, able to detach itself from its own narcissism using victimhood instead when saying: ‘Beyond desire, discarding the rest of the filth. Casting off what’s deepest inside as garbage of the soul that we bear like crosses on our backs’. For this reason, the last text is the most interesting one. Its title is ‘The English Haul: A Report in Translation’ written by Sally O’Reilly which is a Post-Anthropocenic account of the exhibition as if it was seen by an art critic of the future. From that point of view, our understanding of sex is that of a currency and money as a way of connecting and being loved. According to her, we need to overcome the need of the fetishistic art object understood as finished and self-contained. Instead O’Reilly reminds of Bifo Berardi’s Futurability when talking about the beauty of the fragment and why not, of failure. The way the show is curated, however, insists in treating the fragment as an finalised object and as I mentioned before this is its main problem.

But as I said before, Simon English installation at Peer Gallery is a realist exercise and as in all realism, the artist must take sides. What is he trying to tell us? At first glance, the diversion that the modernist curation brings to the mix shows that he doesn’t seem to be up for the challenge. In other words, he does not want to accept responsibility and instead he tries to brush under the carpet the need for definition through irony. The fact that he exhausts himself (although less than before in his career) with drawings, doodles and deletions as if they were an allegory of his own bodily secretions and unfulfilling orgasms only to tell us that we need to accept this moral landscape as a given is puzzling and probably conservative. From that point of view, this show registers the lifestyle of a ghetto of men as sextards (?) for whom chemsex and disconnection are a way of life. One is led to believe that Simon English disapproves that lifestyle while he masturbates obsessively drawing it. And let’s bear in mind that there are a lot of similitaries between pencils and penises. J A T 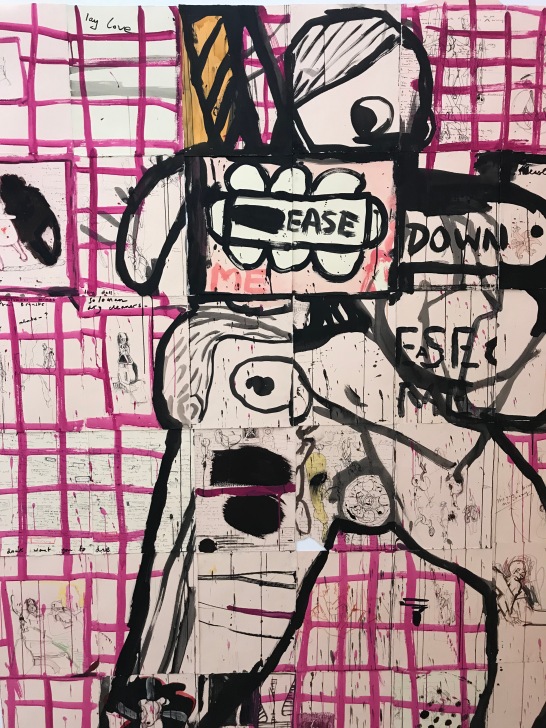